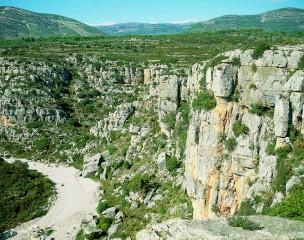 The Barranco de la Valltorta is a Maestrazgo, Tírig, Albocásser, Cuevas de Vinromá park, in which important cultural and ecological vlaues are concentrated.

Thousands of years ago, its inhabitants, the creators of the Levantine Rock Art, painted on their caves and shelters scenes of everyday life and their mythologies. Beholding them we can create aspects of the life of societies that lived in a barely degraded landscape. But its transformation accelerated in historical age. The overexploitation of the wood of the forests, the opening of clearings to favour the birth of pastures and the ploughing of land for agriculture, formed a humanised landscape. Today the distinctive elements of La Valltorta are its Levantine cave paintings, dry stone rural architecture, a varied biological environment and its museum. A museum that acts as a welcome centre for the visitor, providing information about the most interesting aspects of La Valltorta.

The visit to the Barranco de la Valltorta has a double interest. In first place, the contemplation of the paintings is a reflection of the religious worries and the ways of life of some men who started to paint on the walls of their caves seven thousand years ago. On the other hand, in approaching a humanised landscape, modelled by traditional systems of agricultural exploitation and livestock of which interesting architectural traces are conserved, such as huts, ashes and grazing paths. Despite the influence of man on this landscape, La Valltorta is an ecosystem with a varied vegetation and species such as the Bonelli's eagle (Aquila fasciata) or the mountain goat (Capra pyrenaica).

In La Valltorta 21 caves with Levantine art are known, a prehistoric manifestation that extends through the eastern area of the Iberian peninsula, form Huesca and Lérida to the north, to Murcia and Albacete in the south, with an exceptional concentration in the Comunidad Valenciana. In the caves at Valltorta, human and animal figures are painted with great naturalism, more accentuated in the last ones, always red in colour with diverse tonalities.

12140 Albocàsser
Telephone: 964 33 60 10
Location:
A Maestrazgo park that is distributed through the Cuevas de Vinromá, Albocásser and Tirig municipal areas.