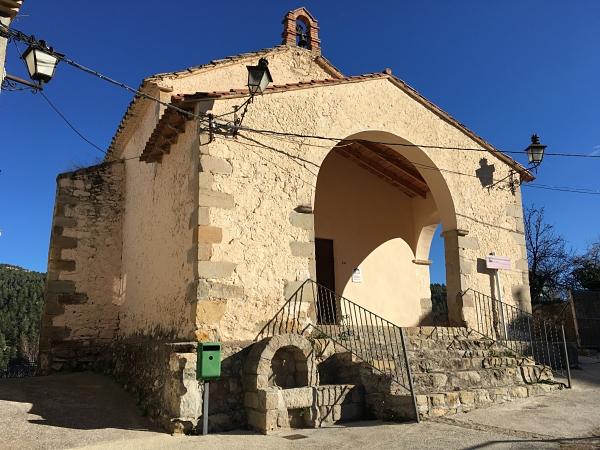 Built at the end of the 18th century or the start of the 19th century -its first documented reference is from 1818-, it is conserved in a perfect state.

It is a temple of masonry walls with plaster, reinforced by a buttress on each of its sides. It consists of three sections of different height: the chapel itself, with gabled roof tiles and a brick belfry in its gable, the sacristy at the top and a porch at the bottom, these last two have an independent covering. The previous porch, with a wooden beam roof and running supports, it has frontal access in a wide rounded arch. On the left side, there is not an opening but there is on the right. Together with a fountain attached to the façade, a stone stairway with a forged railing saves the unevenness of the terrain. The interior is a single nave divided into two sections by rounded arches that they support on pillars, with a clay tiled floor and covered by a barrel vault with small windows. It is necessary to highlight a stone baptismal font from the parish church. The statue of the saint overlooks the altarpiece of the altar in carved wood, of modern construction through a restoration.

The Pascual del Rollo (Pentecostal) is celebrated in it, and the singing of prose in December.