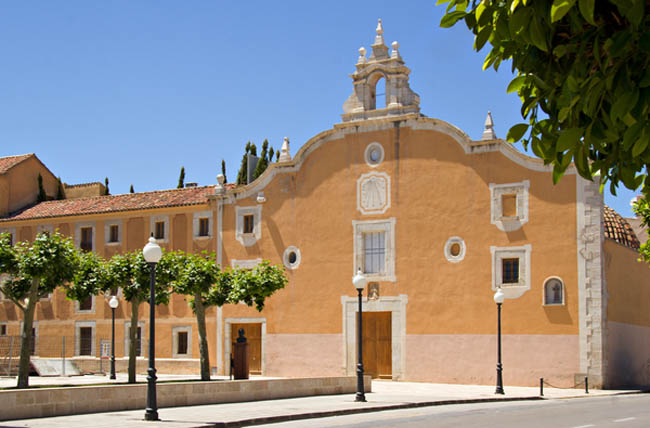 Convent of the Discalced Franciscans, founded in 1578 by Brother Cristóbal de la Plaza. The building was arranged around a small central cloister built entirely with tile plastered with mortar and lime, with simple square pilasters, semi-circular arches and some mouldings. In the 18th century, the Convent was reformed and restructured to be able to raise one more floor and build columns. These reforms are due to the growth of the community, which came to have fifty members. The reforms that were carried out consolidated the appearance of the Convent as it can be seen today. Both the façade and its interior show a simple appearance, without ornaments and very austere, even the church. The façade of the church is Baroque, from 1791, and does not correspond to the original architecture of the 16th century. As a consequence of the Confiscations of Mendizábal, in 1835 the Franciscan order disappeared permanently in Benicarló. In 1843, the Benicarló Town Council requested the building to remodel it and house the public elementary schools, becoming the House of Education until 1919. Later, provisionally, the Convent was used as a Charity Hospital to welcome the poor and sick from the cholera epidemic of 1885. From 1923 to 1973, the building was the barracks for the Civil Guard and, later, it was used as municipal premises and warehouse.

The old Franciscan convent is located outside the walls, in the northern area of the city, at the end of the old boulevard of  Càlig, currently called Calle Sant Francesc, the modern urban development of which has integrated the entire architectural complex of the convent in the centre of the town.

The former convent of Franciscans, is located outside the walls, in the north of the city, at the end of the old Rambla de Càlig, now called Calle Sant Francesc, the modern urban development of which has integrated the entire architectural convent in the core of the population.