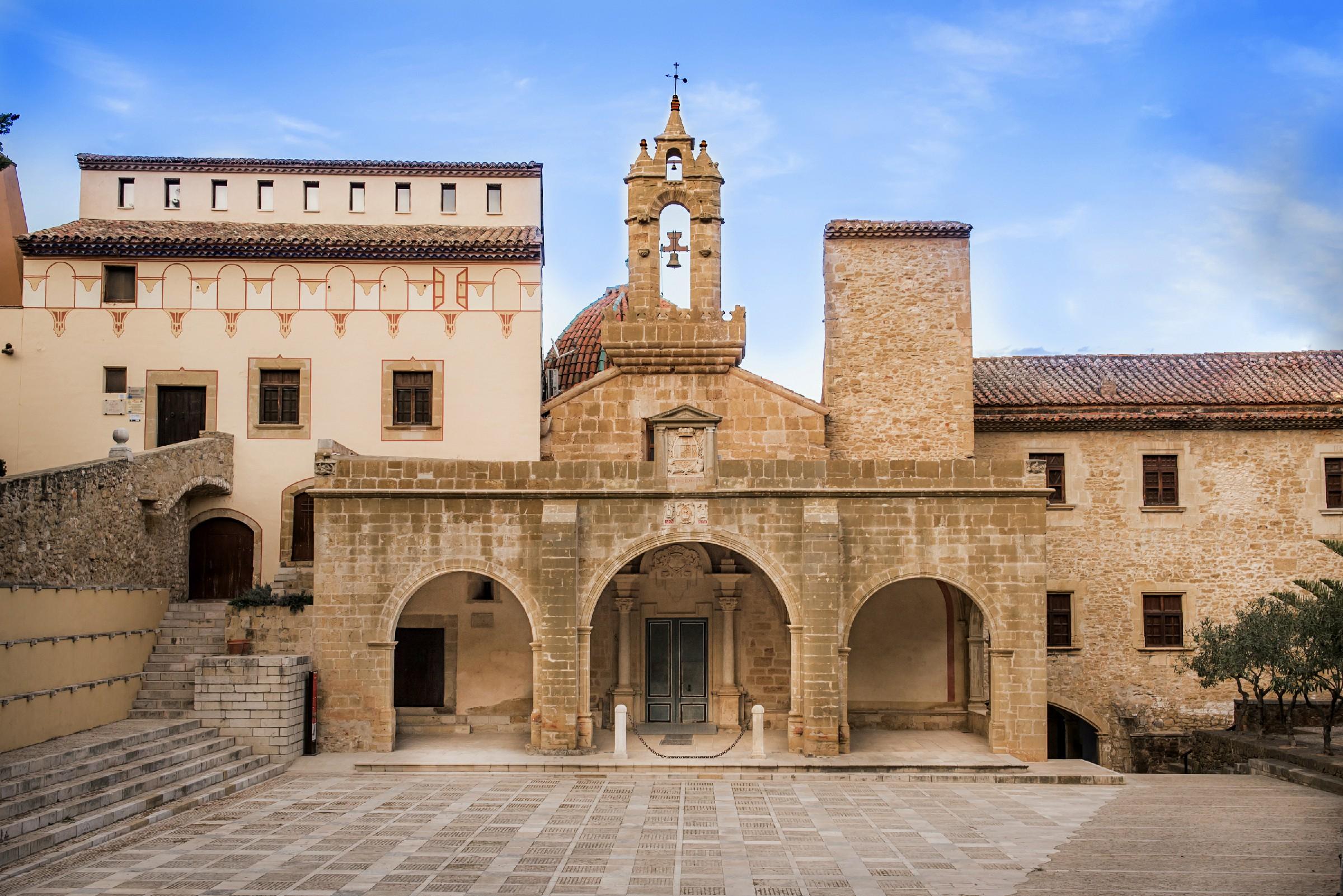 The origin of the devotion and worship arose from 1384, linked with the discovery of the statue of the Virgin, by pastors Anastasio and Jaime Sorli. This led to the construction of a small chapel that was left included on the ground floor of the current hostelry, next to the fountain.

It was built by Bautista Vázquez in 1598. The complex of buildings that basically belong to the 16th century are preserved. This is formed of the Church (15th-18th centuries), the Casa dels Capellans (16th century), the Hostelry, (16th century), the Palacio Duques de Segorbe (16th century) and the wayside cross named “Prigó Cobert” (16th century). The first church, dated from 1439, had a floor next to the current one with a single nave with side chapels and a cross-ribbed vault. The church was remodeled in the 18th century. It is a single nave church with four sections and a trancept, separated by rounded arches on pillars. The interior roof has a barrel vault with small windows in the nave, a barrel vault in the arms of the transept, while in the center of it a dome rises above pendetives.

Behind the main chapel there is the dressing room of the Virgin, that also has access from the sacristy, this presbytery area has its own dome separated from the nave by a 18th century fence. A gate precedes foot access, made from masonry in 1588 as stated on the shield that there is above the central arch. It has three rounded arches with the largest being the central arch, this space is covered with a cross-ribbed vault.

The upper part is terraced, with the chimney on the back of the hostelry and the belfry of the old Gothic temple. On the top the shield of Charles V is placed, it is an aedicula (relic) flanked by columns and with a triangular front on the upper part. The access gate bears the inscription of 1716, the time at which the important works of the temple took place. The inside of the chuch is deocrated with frescos painted by Vicente Guilló, with alegoric themes from biblical characters and narratives on the theme of the Virgin, since it represents the discovery of the Virgin. Red and ochre tones predominate.

There are also plasterworks with nature motifs. The hostelry and the bishop´s house are above the small chapel located next ot the fountain. The patio of the complex, open, is arranged with segmented arches, and is overlooked by the hostelry, the nobles’ houses and halls such as the so called “Bishop’s Hall”. The walls of the patio were decorated with architectural or forced perspective (trompe l’oeil) paintings, of which few remains are preserved. Remains of the original flooring of the halls on the main floor are preserved with tiling of the era, also  doors, windows, wooden roofs, the latter with decorated corbels with anthropomorphic motifs. The Bisgop of Segorbe, Jofré de Borja, was patron of this Royal Sanctuary and as an example of this, a shield above the window is preserved.

This complex was declared a Royal Chapel in 1542 by Charles V, renovated by Phillip II and confirmed by a Papal Bull in 1555. It has been declared a National Historical-Artistic Monument, consisting of: Pórtico (1508), Templo (15th-18th century), Cross of the Seventh Pain of the Virgen (finished in 1598), Capilla Fuente del Milagro (14th century), Carpentry of Mudejar art (15th century) Cloister Hostelry (1531-1536) and remains of the Palace of Duke Alfonso de Aragon. A sanctuary of great importance that has been visited by Popes and Kings throughout the centuries. There is a restaurant and a recreation area.

In 2006 it formed part of the Exposition of Light of the saints.