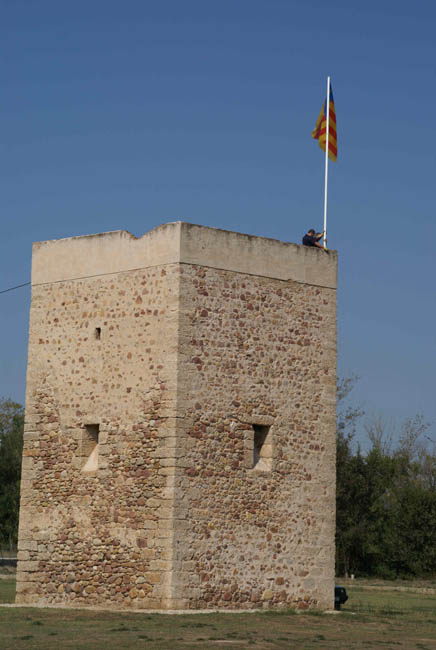 The Torre del Mar, belongs to the type of watchtowers which filled the Valencian coastline wherever the rocky coast required the presence of these buildings. In compliance with its noble surveillance function, their mission was to safeguard the coast from enemy vessels. In the event of spotting a vessel which represented a danger, the population was alerted and the closest towns were warned as soon as possible by means of smoke signals or even carrier pigeons. Thus, passing on alerts from tower to tower regarding possible attacks.

The Torre del Mar was built by the Regional Government in 1547 using the tax on silk and is the only one standing of several watchtowers which the Burriana coastline as of 1552 to provide protection against pirate attacks.

Despite its proximity to the river spring, given its location alongside the Clot de la Mare de Déu setting, its water was sourced from its own well located on the north part of the ground floor, also highlighting its mangers and its voussoir door with horizontal lintel.

It rises like a square-based tower with a height of 14 metres and with a 25-metre perimeter. The ground floor comprises a small stable and is covered by a barrel vault with three square loopholes for the soldiers to defend themselves in the event of being invaded. The second floor includes two loophole windows, highlighting the one facing the northeast, which has two sidee openings for the cross fire from its defenders.

On the exterior, on the southwestern façade, there is a primitive door with rough ashlar jambs and a lobbed dintel in brick. On a more curious note, the outer wall on the south side at the height of the second floor preserves a primitive door, which has been blocked, with a lobbed lintel of Mudejar style.

This building is protected by the generic Declaration of the Decree of 22 April 1949, and Law 16/1985 on Spanish Historic Heritage.

2 km from the municipality, by the Grau road.