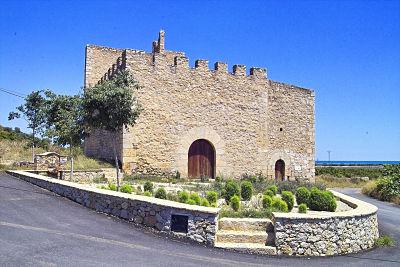 Located in a coastal area comprised of several hamlets, the construction of this church began in the late 13th century with a second intervention in the 14th century when it was fortified due to all the attacks from the sea.

The chapel is a single-nave building divided into four segments and covered by a pointed barrel vault. The main sanctuary is semi-circular in shape and covered by a ribbed vault.  During fortification, the wall was raised all the way to the roof which was eliminated to become a crenelated terrace. A crenelated tower rises above the sanctuary. There are two surveillance and guard outbuildings. To the right of the building at the foot is an annexed outbuilding with a double-pitched roof. The masonry brickwork features ashlar on the angles.

The Albalat chapel, which is located at the foot of the castle of the same name, belonged to the Miravet Castle demarcation along with its territories and hamlets.

9 km from the town along the Cabanes-Oropesa road. It is located at the foot of Albalat Castle.