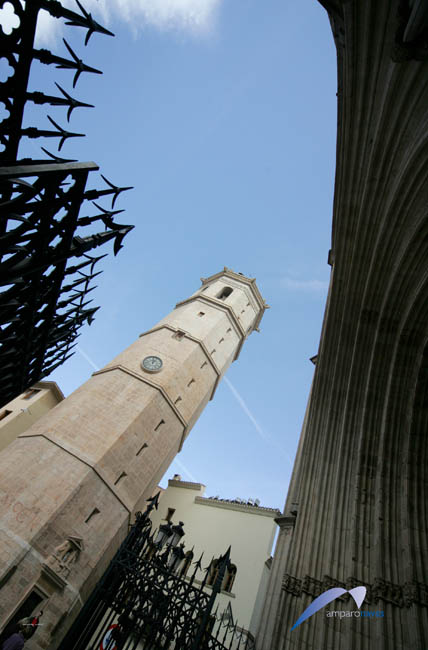 It is located in the Mayor square, in the centre of the city, next to the church of Santa Maria la Mayor. The construction works began in 1440. This tower was finally finished in 1604 after many years of uncertainty about its construction and how to build it. The project of Francisco Galiansa de la Lancha, Guillelm del Rei, Pedro Crosali, Marc Volsanys, Antoni and Joan Saura was chosen to build the Fadrí.

It’s a free, octagonal bell tower with an approximate height of 60 meters. It is divided into four bodies, which correspond with the camera’s clock, the ecclesiastic prison, and house of the ringer and the chamber of the bells. These four inner bodies do not correspond with the exterior cornice lines. At the top is a banister decorated with eight gargoyles.

It represents Spanish architecture of the late sixteenth century very well, in fact the building is characterised by a simple architecture, without decoration and a kind of formal roughness typical of those years.

The Tower is topped with a spire of 1735, replica of the original destroyed in 1656, which is of triangular plant with pilasters of Tuscan order covered with blue tile and topped with a weather vane in 1860. Inside, a discontinuous intrados spiral staircase gives access to the various floors of the tower, whose rooms have stone vaulted roof. The tower is accessed through a cover upper with a niche at the top, flanked by scrolls, and a pediment triangular at the top. Under the arms of the Kingdom of Valencia and Castellón towers, there is an inscription in the lintel which refers to the construction of the Tower between 1591 and 1604.

The Fadri is listed as asset of Cultural Interest, and is registered in the National Heritage and Cultural Heritage of the Generalitat Valenciana.