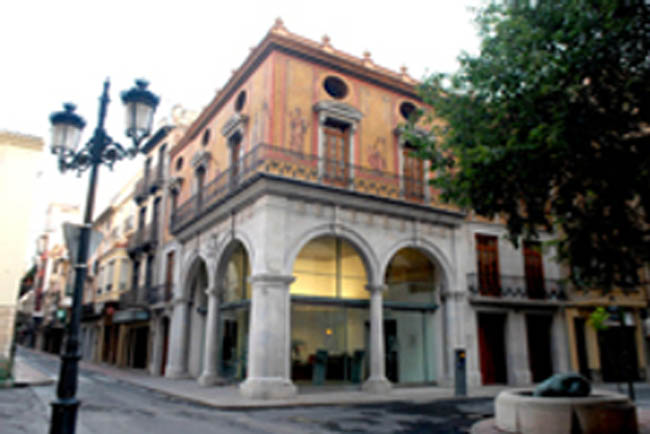 It starts to build in 1606-1617, by Francisco Galiança. It is a question of a building with notable samples of Italian vocabulary and with guidelines of the late Renaissance. It was a building of rectangular base, single-storey and two facades open with two large arches supported by Tuscan columns.

In 1792 and ruinous State presenting the building, Castellón City Council agrees to sell it. The building of la Lonja thus acquires a very particular characteristic: the bass is municipal property for public use, while the upper building is a privately owned family housing.

The new construction shows some precious facades with allegorical paintings of Joaquín Oliet. In 1906 the town sells the old Lonja and passed into private hands. The new owners gave an eclectic character and academic style which involves the closure of the arches and the construction of a mezzanine floor to allocate it a store and the rest of the building to a bourgeois housing. Vicente Castell carried out the pictorial remodeling, and maintained the allegories of Oliet and incorporated Pompeian motifs. In 1984 was declared historic-artistic monument.

Jaume I University acquired the building in November 1999 to recover it for the city as a center of cultural and educational development. The latest architectural interventions have sought to recover the maximum fidelity to the accumulation of styles and architectural interventions that has lived in the building. The Lonja del Cáñamo is listed as asset of Cultural Interest, and is registered in the National Heritage and Cultural Heritage of the Generalitat Valenciana.